Welcome to All Saints church. One of my favourite features is the memorial to Moses Dodd.  In his long ministry he is described as ‘testifying repentance towards God and faith towards our Lord Jesus Christ’.  This same good news continues to draw people today.  I hope you will enjoy your visit, and I warmly invite you to join us on Sunday. 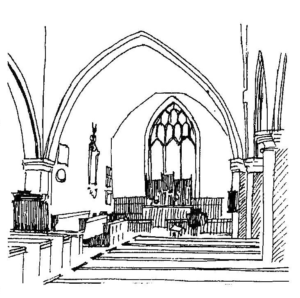 Dates. The first record of the church in Fordham is 1087 when it was recorded as a gift from William the Conqueror to the Abbey of Bec in Normandy. The nave probably dates from this period.

The church was largely re-built in the early 14th century at the time when Decorated was evolving into the Perpendicular style.  The aisles were constructed, the porch and tower built and the chancel rebuilt.  In 1545 the walls were whitened and some stained glass removed.  A restoration was completed in 1861 when the windows were re-glazed, the floors tiled and the pews replaced.  None of the doors are original.

Rood loft and beam.  An inventory of 1548 records mentions a rood loft in the church.  This was above a rood screen which enclosed the chancel.  The rood loft gallery passed before the rood beam supporting the figures of Christ on the Cross, with St. John and the Virgin Mary on either side.  It enabled candles on the beam to be lit or replaces and the rood to be cleaned.  Access may have been by ladder.  All this would have been dismantled very soon after the inventory. 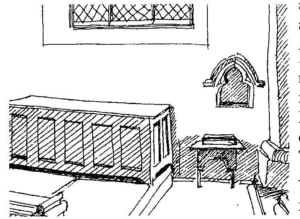 resent in Fordham Church.  A piscina is a small basin and drain usually built into the wall on the south side of an altar to enable unwanted holy water to be emptied onto consecrated ground outside.  Their presence in the north and south aisles indicate earlier side chapels in these aisles.

Burials inside the church.  Three members of the Creffield family are buried inside.  These include Alice, died 1522 who left her girdle of silver gilt to be made into a chalice for the church.  Location unknown.  There is a reference to a vault in the chancel.

You are invited to walk around the church following the plan below.

South door.  On the west jamb is a well cut merchant’s mark between the initials W S.  A few other faint marks can be detected. 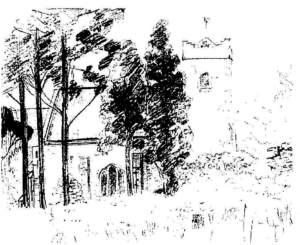 The walls are mainly of flint and rubble construction with some Roman tiles, 14th century and Tudor brick.  The dressings are of Barnack and soft limestone.

The roofs of the chancel, nave and porch are tiled with lead flats behind the parapets of the tower and aisles.

The original spire, a known landmark, fell down in 1796, damaging the west side of the tower.

Label stops of carved heads are to be seen on the end of the window mouldings.  Those on several of the windows of the south aisle are of particular interest. 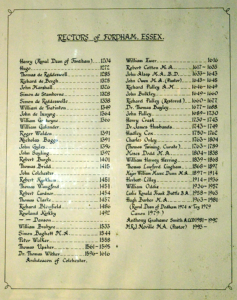